Bob Cornuke,1 a dear friend, visited us this past week and shared with us one of his recent adventures, which parallels several previous surreptitious visits to Saudi Arabia and clearly appears to corroborate some surprising discoveries. Bob Cornuke and Larry Williams managed - by means we will defer discussing here - to spend some time in Saudi Arabia and made it a point to check out an astounding theory about the Exodus in the Bible.

Most people understand that Mount Sinai is Jebel Musa, in the Sinai Peninsula, where the Monastery of St. Catherine's is located. Look at any competent Bible atlas, and it will probably include a “?” since that location is traditional, but speculative. There are a number of tenuous conjectures associated with this location and numerous books have been written suggesting alternative candidates, among them Jebel Helal further north in the Sinai Peninsula, or Jebel Serbal, in the south. Another candidate is Har Karkom, known to the Bedouins as Jebel Ideid, also in the north.2 None of these, all in the Sinai Peninsula, have any real archaeological evidence supporting them.

However, Moses, when first exiled from Egypt, dwelt in Midian, at the base of Mt. Sinai. Midian was in the northwest corner of Saudi Arabia. The New Testament has always referred to Mount Sinai as being in Arabia.3

An alternative route for the Exodus according to Cornuke and Williams is suggested in the following map. 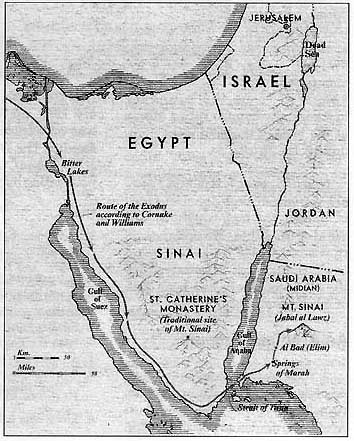 With scuba gear, they discovered a remarkable land bridge crossing the Strait of Tiran and the southern extremity of the Gulf of Aqaba, between Saudi Arabia and the Sinai Peninsula. Presently about 50 ft. underwater and several hundred yards in width, it drops several thousand feet on either side. The topography of the southern tip of the Sinai also fits the details of the Exodus narrative well.

Jabal al Lawz rises about 8,000 feet above the desert. It consists of two snub-nosed peaks, with a natural amphitheater between them; the stage on which the most momentous drama in history had been played out. However, as one approaches closer to the mountain, one encounters military guards and a chain link fence, 15 feet high, topped with barbed wire and a sign, in Arabic and English:

ARCHAEOLOGICAL AREA WARNING:
"IT IS UNLAWFUL TO TRESPASS."
VIOLATORS ARE SUBJECT TO PENALTIES STIPULATED IN THE ANTIQUITIES REGULATIONS
PASSED BY ROYAL DECREE NO. M 26,
U 23.6.1392

Nevertheless, slipping past the guards at night and digging under the fence, Bob and Larry continued their adventure. Just south of the mountain, they found what they believe may have been the battlefield of Rephidim (Exodus 17:1, 8; 19:2; Numbers 33:14, 15), a dozen football fields in size.

They also found a large altar made up of extremely large, stacked boulders. On one of them they found pictographs of cattle, not sheep native to Arabia. These pictographs resembled the Apis bulls of Egypt. Could this have been the altar for the Golden Calf? (Cf. Exodus 32.)

As one reaches the higher elevations of Jabal al Lawz, the ground turns black, dark like obsidian; the rocks look almost like coal. (Yet when they're broken, they were actually granite.) They were not volcanic; they appeared as if scorched from above (Exodus 19:18). They even found an unusually large crevice in which a man could hide (Exodus 33:22?) They also found an old stream bed; “the brook that descended out of the mount” (Deuteronomy 9:21?)

Needless to say, Bob and Larry are convinced that Jabal al Lawz is, indeed, the long-sought Mount Sinai of the Bible. We understand that a number of books will begin to assemble what is known about the site, and there has been talk of a television documentary.

This article was originally published in the
July 2020 Personal Update NewsJournal.
For a FREE 1-Year Subscription, click here.
**NOTES**

1 Bob Cornuke is a native Californian, a former football star at Fresno State, and a legendary member of the SWAT team of the Costa Mesa Police Department. A participant in numerous adventures, he is in the ministry and is presently associated with the Family Research Council.