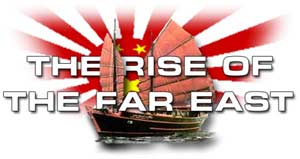 The original birth of civilization began in the Middle East and migrated westward - to Greece, to Rome, and then to the nations of northern Europe. As Henry Luce so aptly quipped in 1941, ''The twentieth century was the American Century.'' And indeed it was. But the centroid of power continues to migrate westward: it is widely anticipated that the 21st century will be the ''Asian Century.''

With recent shifts in the economic centers of the world, most notably the decline of the U.S., the Far East is quickly rising to fill the void.

Far-East Update The Kings of the East by Dr. Steve Elwart

The Kings of South Asia by Steve Elwart

Strategic Update: 2010 and Beyond - China by Mary Miller, Director of Research

U.S. National Security and Military/Commercial Concerns with the People's Republic of China - The Cox Report

Torture's role in Chinese justice - Justice in China is swift but not sure. Criminal investigations nearly always end in guilty pleas. Prosecutors almost never lose cases brought to trial. But recent revelations of wrongful convictions have exposed deep flaws in a judicial system that often answers more to political leaders than the law.

China could Launch Next Manned Space Mission this Month - China could move ahead the launch of its next manned space mission to as early as this month. Keenly aware of the military, scientific and commercial benefits of space knowledge, China has been aggressively pursuing space exploration for years.

China builds up strategic sea lanes - China is building up military forces and setting up bases along sea lanes from the Middle East to project its power overseas and protect its oil shipments, according to a previously undisclosed internal report prepared for Defense Secretary Donald H. Rumsfeld.

Energy Woes Plague Shanghai - Officials in energy-hungry Shanghai are doing everything they can to curb power consumption and reduce the plague of brownouts.