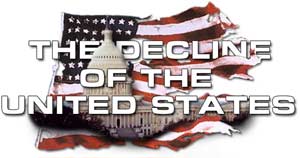 “It was the best of times and it was the worst of times.”
-Charles Dickens, A Tale of Two Cities

The Best of Times?

By many reckonings, it appears to be the best of times in America: We enjoy a robust economy, reinforced by continually advancing technologies. At least one computer in every home, and a personal telephone on almost everyone’s belt. People are buying their 3rd and 4th cars. Our military is the most feared throughout the world. Indeed, in many ways, it seems like the best of times.

The Supreme Court Upholds Freedom of Prayer May 06, 2014

The Crisis of the Middle Class and American Power December 31, 2013

Common Core Curriculum Rotten to the Core by Chris Corlett

Culture Wars Christ in the Ranks by Dr. Steve Elwart

The Many Benefits of Traditional Marriage - The benefits of marriage are most observable within the measurable realms of health, wealth, and (self-reported) sexual fulfillment. In each of these categories, married couples experience immense advantages that cohabitating couples, or individuals who remain single, do not.

Is Homosexuality Genetic? - This site contains a variety of resources on the health dangers of the homosexual lifestyle and evidence that homosexuality is not innate and unchangeable.

The Declaration of Independence -

The Federalist Papers - A definitive review of the Constitution written by Alexander Hamilton, John Jay, and James Madison

The American Center for Law and Justice -

Ultrasound Before Abortion Says Virginia Senate - Women who want to have an abortion in Virginia must first have an ultrasound under precedent-setting legislation that narrowly passed the Virginia Senate on Tuesday. Conservative Republicans in the evenly divided chamber, with the help of two pro-life Democrats, dismissed complaints from women's rights groups and national ridicule from late-night comedians to approve the bill on a 21-19 vote.

Roberts Grilled on Abortion, Civil Rights - Supreme Court chief justice nominee John Roberts on Tuesday battled a number of senators who tried to wring out of him opinions on hot-button issues like abortion and end-of-life issues. But he stood his ground, maintaining that he stands by precedent already set and that he could not answer questions about issues that are or will be before the court.

Sticker in Textbook Reignites Evolution Debate - A sticker in suburban Atlanta science textbooks that says evolution is a theory, not a fact was challenged in court Monday as an unlawful promotion of religion.