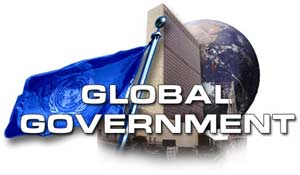 The move toward a global government received a big boost this summer by the introduction of a proposal for an International Criminal Court. Over U.S. objections, the United Nations Diplomatic Conference voted 120 to 7 in favor of establishing an international criminal court to try individuals accused of genocide, war crimes, crimes against humanity, and the crime of aggression.

The Economy How Interest Rates Rule the World by David McAlvany

The Economy Toward a New World Monetary Order by David McAlvany

The Economy The Future of Money by Dr. Steve Elwart

The New Face of Global Security by Mary Gehl

The United States Program for General and Complete Disarmament in a Peaceful World - U.S. Department of State - September, 1961

Coalition for an ICC Home Page on the International Criminal Court -

Web site of the Rome Statute of the International Criminal Court -

Is there a Coming New World Order? - Many links to important Global Governance information from WorthyNews

World Leaders Agree to Fight Terrorism but Disagree on a Definition - More than 160 presidents, prime ministers and kings convened at the United Nations for a summit marking the organization's 60th anniversary. The meeting was initially intended to focus on economic development, but those issues became wrapped into the larger concern about terrorism. In the days leading up to the summit, however, the UN failed even to agree on a definition of terrorism.

Oil for Food is Just the Beginning - How widespread is the corruption at the United Nations? The multibillion-dollar Iraq Oil-for-Food scandal was just the beginning. Now the issue is becoming the scale of corruption in the U.N.'s normal operations " and which individuals and corporations are reaping the benefits of a network of bribery and conspiracy that investigators have just begun to uncover.

UN Signs Pact with New World Court Opposed by US - The pact that would encourage "greater cooperation and consultation" on administration and judicial matters was signed by UN Secretary-General Kofi Annan and Judge Phillipe Kirsch of Canada, the court's president.

Congress OKs Delay on Biometric Passports - Countries whose citizens can enter the United States without a visa will get an extra year to provide "tamperproof" biometric passports under legislation approved by the Senate.

Schoolchildren to be RFID-Chipped - School authorities in the Japanese city of Osaka have decided to start chipping children in one primary school. The chips will be put onto kids' schoolbags, name tags or clothing in order to track the kids' movements.