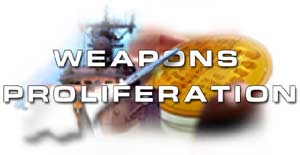 Modern Technology has made it possible for countries all over the world to possess the means for controlling their own populations and to threaten other nations with mass destruction. It no longer matters whether a nation is rich or poor, large or small, first world or third world. Almost anyone can make or purchase weapons that 50 years ago could not even be imagined.

Technology The Implications of 3D Printing by Mary Gehl

Technology The Future of Warfare by Dr. Steve Elwart

Advice from Baghdad - Iraq says U.S. needs to 'think over what happened' on 9-11 - Reported to have nuclear, biological, and chemical weapons

North Korea Throws Nuclear Deal Into Doubt - North Korea and the US on Tuesday disputed crucial details of their landmark six-party agreement reached just a day earlier, with Pyongyang declaring it would only give up its nuclear weapons after it received light-water reactors.

Iran Warns Against Sanctions Over Nukes - Iran on Tuesday threatened to resume uranium enrichment and bar open inspections of its nuclear facilities if an ongoing meeting of the U.N. nuclear watchdog decides to refer it to the Security Council for possible sanctions.

Iran says has made new atomic breakthrough - Iran has made a new breakthrough in its controversial nuclear program, successfully using biotechnology to extract larger and cheaper quantities of uranium concentrate from its mines, state television reported.