Our visits to the Holy Land are always exhilarating and refreshing. Our first-time visitors always come alive in the faith when they see all the historic places and realize we serve a living God who acts in history!

This years study tour began on the Mediterranean coast of Israel, at Caesarea. This was the Roman headquarters during their occupation of Judea. It was here that Paul was imprisoned, etc. From Caesarea, we visited Mt. Carmel and viewed the Jezreel Valley, then traveled across to Nazareth and the Galilee. One of the highlights in Galilee was to sit on the Mount of Beatitudes, overlooking the Sea of Galilee, and read from Jesus Sermon on the Mount - at the place where He actually gave it! (Seerelated articlesfor a Bible study on Matthew Chapters 5-7).

The excursions in and around Jerusalem included the new excavations at the southern wall of the Temple Mount, the Temple Mount itself, the Mount of Olives, Gethsemane and, of course, the Garden Tomb (communion at the empty tomb is still the emotional highlight for most of us, no matter how often weve been there).

In response to a request of the Christian Allies Caucus of the Knesset (Israels Parliament), we again sponsored a conference on the Temple to be rebuilt in Jerusalem. (We had sponsored an annual series of these a decade ago.) We know that the Temple will be rebuilt in Jerusalem - in spite of its ostensible unlikelihood in todays politics - because Jesus, John, and Paul all make reference to it.1 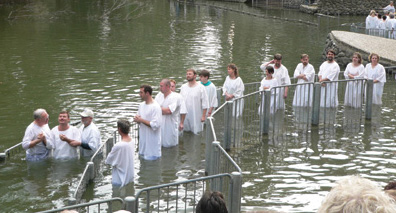 The speakers who made presentations included Dr. Asher Kaufman and Tuvia Sagiv, both famous for their research on the archeological issues surrounding the site. (Both are dear friends and it was a delight to renew the relationships!)

Dr. Kaufman presented the reasons he believes that the Temple stood north of the Dome of the Rock, a view that was popularized in several publications over a decade ago.2

Tuvia Sagiv, a professional architect from Tel Aviv, made a most impressive presentation highlighting the reasons that suggest a location south of the Dome of the Rock. These included infrared photos that imply that the Dome of the Rock actually sits where the Antonia Fortress once stood. (He even showed evidences that indicate that pagan structures once stood north of the Dome, which may be dated from Solomons day!)

Clearly, these issues will not be resolved until serious archaeological investigations can be conducted on the Temple Mount, which is impossible today. The site is under the control of the WAQF, the high Muslim Council of Jordan, and the Muslims are busy attempting to destroy all historic evidence of previous Jewish presence on the site. 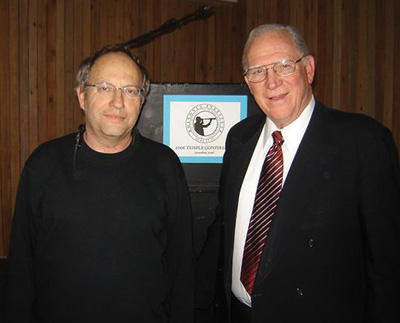 Other presentations at the conference included a most impressive presentation by Nitsana Leitner, Director of Shurat HaDin, the Israel Law Center. Shurat HaDin has been surprisingly successful in taking legal action, on behalf of the families of terrorist victims, against terrorist organizations in both the U.S. and Europe, as well as in Israel. One of the highlights of the conference was the presentation of an expression of support, which was signed by the participants of our Study Tour and which was formally presented to the representatives of the Knesset.

A Day with the IDF

We also spent a day volunteering with the Israel Defense Forces. The leaders at the base we were assigned to were astonished to see 170 Americans on their hands and knees, pulling weeds, planting trees, and landscaping the grounds! It was great fun and many photos were taken of our group climbing all over the armored personnel carriers, and other military equipment. [Our forthcoming trip this October will include insider briefings by the IDF, by Shin Bet (their secret service), and by the Mossad (their fabled intelligence service). See here for details.]

This article was originally published in the
May 2006 Personal Update News Journal.

Trip Report: Our Visit to the Land of Israel

The Manifesto of our King: The Sermon on the Mount