In the currently popular trend toward mysticisms of various sorts, Jewish mysticism has become popular among many, and this series of articles has been a response for the serious Bible student. In this series we have been reviewing the origin of Talmudic Judaism, the emergence of the Kabbalah of Jewish mysticism, and the derivation of Hasidism which was spawned by it.

In this article we will review the specific prohibitions and non-Biblical views that emerge from the Kabbalah and how we should avoid the same errors.

The Kabbalah embodies occultic practices. Anyone with a modicum of Biblical literacy should realize that occult practices are expressly prohibited in the Scriptures. Scripture condemns by name spiritism, mediumism (channeling), and necromancy;1 various forms of sorcery and divination,2 including astrology,3 and magic.4 In ancient Israel, divination was a capital crime; if someone was caught casting a horoscope, or other occultic practice, they were put to death. Why?

Because God is jealous of His uniqueness, and He alone knows what the future holds.5 To intrude on His office is to attempt to intrude on His glory.6 Occult activity also courts deception and betrayal from the demonic realm, and promotes evil under the guise of legitimate religious practice. Occult involvement will eventually lead to judgment for those who refuse to forsake it.7

How did the current beliefs of the Kabbalah drift so far from the direct teachings of the Torah? 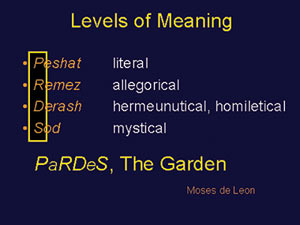 In Hebrew literature there are four classical levels of meaning, or interpretation:

This paradigm emerged before the 12th century, and the rabbis use the mnemonic, PaRDeS, (The Garden, or Paradise), to remember them. The first three have their parallels in traditional Christian hermeneutics (the theory of interpretation). (We would order them with Remez as third, and Derash as second, but that would spoil their mnemonic.)

It is this fourth level, the Sod, which leads to the quicksand of virtually limitless conjectures. There are too few effective bridles to avoid heretical premises. For example, Moses prayer (Deut 3:23ff) is explained 232 different ways!8

The Zohar stresses profound symbolic importance on many insignificant surface details.9 With their obsession with manipulations of the alphabet and their numeric mysticisms, the Kabbalists observe few borders on their fanciful conjectures - even to the ignoring of the direct prohibitions of the Torah Itself!

The hermeneutical (interpretative) difficulties began with the redefinition of Judaism that followed the rejection of Jesus Christ and subsequent destruction of the Temple in 70 A.D. This, in turn, resulted in the Talmud (as was reviewed in our earlier articles) which emerged as their principal instructional reference.

During the Geonic Era, in which leading Hebrew sages were venerated so highly - even above the pehsat, or direct meaning of the text - the troubles began to surface. Opinions of the expert elite began to obfuscate the direct implications of the text. This distancing was amplified by the inclusion of oral traditions supplementing the foundational text of the Torah itself. The Law - which Jesus summarized in just two Great Commandments10 - was expanded to 613 commandments. The geonic tether became so extended that the tangles began.

Nowhere is this more apparent than in the Kabbalah. The Ein Sof of the Kabbalah is nothing less than the attempt to depersonalize the very God who has gone to such lengths to reveal Himself and to establish His reputation for making and keeping His promises!

But it goes even further. One of the manifest sins specifically prohibited in the Torah is the uncovering of the fathers nakedness.11 This is emphasized as early as Genesis 9. The speculations of the ten sefirot (see chart) are nothing less than intruding on the privacy of the Godhead Itself!

But it gets worse! The meditative disciplines of the Kabbalah promise to enable individuals to share and participate in the diverse dimensions of Gods being (similar to the claims of New Age aspirants as well). Kabbalah goes even further: the doctrines associated with tikkun, which involves the redemption and repair of the Godhead itself, requires mankind to give Him a hand!

In Lurianic Kabbalah, the Ein Sof withdrew into itself (tzimtzum) at the outset of creation, making room for the world, but also for evil. A cosmic catastrophe occurred during emanation when vessels of the divine light shattered and the sparks were imprisoned in the world in shards of evil (qelippot).

It is held that God, as well as Israel, was in need of redemption from exile, and that humanity was assigned the critical role in the cosmic drama of redemption (tiqqun).

The human task, through prayer and proper observance of the commandments, becomes nothing less than the redemption (tiqqun) of the world and the reunification of the Godhead.

Among other things, this would seem to also violate the 3rd Commandment:12

Thou shalt not take the name of the LORD thy God in vain; for the LORD will not hold him guiltless that taketh his name in vain.

I believe that this commandment has nothing to do with vocabulary: it is all about ambassadorship! We had better not take on the name of the King unless we are able to represent Him faithfully!

Lets leave the occultic and theosophic conjectures of Kabbalah and focus on how we, as Biblical inquirers, can avoid these non-Biblical fantasies and blasphemies.

What epistemological lessons are there to be learned here?

1. Establish the integrity of the text.

This is where we begin. Sixty-six separate books, penned by over forty authors, over the better part of several thousand years; yet, manifestly a single, deliberate design. Every word, every letter - even the structures hidden behind the text - bear demonstrable evidence of a single source. And if thats true, then that source had to exist outside the constraints of space-time! Yes, you can prove it. And once you have discovered that for yourself it will change your entire perspective about everything. No human meddling allowed.

2. Appreciate the precision of the text.

God means what He says and says what He means. This derives from the investigations supporting (1) above. Especially in the area of eschatology (study of last things), the precision of the text is extremely important. Be sure your understanding of the meaning of a word is consistent with the rest of the message system: the Whole Counsel of God.

Allegories and metaphors are among the several hundred different types of rhetorical devices found in the text. They are illustrative and can illuminate in unique ways. But they never contradict the clear and direct teaching of the text itself.

4. Evaluate the context within the Whole Counsel of God.13

Recognize that your adventure as a student is unfinished. Now we see through a glass darkly; then, face to face.14 Like a giant jigsaw puzzle, each piece takes its significance in how it fits in among those already in place. Forcing it only causes distortions. Withhold judgment until all the key pieces are in place.

And remember the counsel of Paul:

Beware lest any man spoil you through philosophy and vain deceit, after the tradition of men, after the rudiments of the world, and not after Christ.

There is, indeed, a man through whom the world is redeemed: and that man is presently sitting on the throne of God!

This article was originally published in the
April 2005 Personal Update News Journal.

Epistemology, Part 7: How Constant are the "Constants"?

Epistemology, Part 2: The Failure of Empiricism

Epistemology, Part 1: The Battle for the Heart