The appetite for aliens has once again been heightened by the most frequent news releases by the mainline media. In a world struggling under the stress of increasing global threats, the beleaguered masses may be looking for outside help to rescue mankind.

Breaking the Silence or Boosting the Support?

According to Fox News, the former Director of ATTIP, Luiz Elizondo said, “The Pentagon has admitted that a US Navy destroyer captured an eerie night-vision footage of mysterious flashing objects flying above it and another warship.”1 The Advanced Aerospace Threat Identification Program (AATIP) was an investigatory effort funded by the United States Government to study unidentified flying objects (UFOs) or unexplained aerial phenomena (UAP). Officially, it conducted its research from 2007 until 2012. Its findings were then made public in 2017 and have slowly been shared with the public over the last four years.

I think it is safe to say that with both illusionists and politicians, timing is everything. Using “false flags” is a way of diverting attention away from the impending dilution. Are we witnessing the pre-ingredients of the end times deception spoken of so many times in the Bible?

It all began with a Radio Drama. At 8 pm Eastern Standard Time on Sunday, October 30, 1938, a 23-year-old Orson Welles read the 17th episode of the CBS Radio series “The Mercury Theatre on the Air.” He started the broadcast by saying, “We know now that in the early years of the 20th century, this world was being watched closely by intelligences greater than man’s and yet as mortal as his own.”2 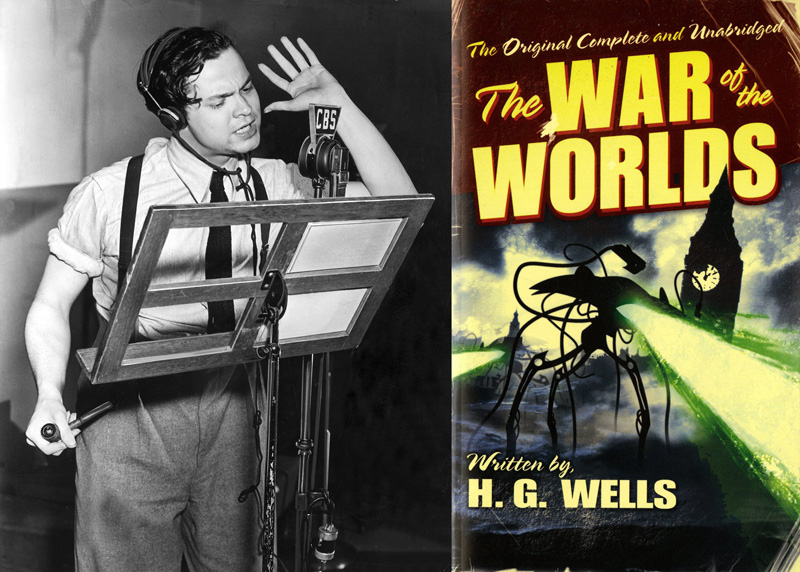 Though the program began with the announcement that it was a story based on a novel, most listeners did not hear the warning. Across the United States, thousands of people called radio stations, police and newspapers, and many loaded up their cars and fled their homes. Perhaps it was the global jitters of an impending world war. Perhaps it was the weariness of fear that came from years of economic depression. Whatever it was, I believe it fueled an unquenchable fascination with the cosmic unknown.

The Root of Roswell

On July 4, 1947, in Roswell, New Mexico, Sheriff George Wilcox contacted Roswell Army Airfield regarding wreckage discovered on Mac Brazel’s ranch. The Army sealed off the area; confiscated all items. On July 8, 1947, Col. William Blanchard, Commander, 509th Bomb Group, issued an official press release stating that the wreckage of a “crashed disk” had been recovered. It was published in 30 newspapers that afternoon. Within hours, a second press release, rescinding the first one, was issued from the office of Brigadier General Roger Ramey, Commander, Eighth Air Force, at Fort Worth Army Air Field in Texas (400 miles away). It claimed that Col. Blanchard and the officers of the 509th Bomb Group at Roswell had made an unbelievably foolish mistake; somehow incorrectly identified “a weather balloon and its radar reflector” as the wreckage of a “crashed disk.”

To traverse the minefield of terms used to describe this popular phenomenon, we need to establish a vocabulary baseline from which we can address this topic. The term “Extraterrestrial” used as a noun means “a hypothetical or fictional being from outer space, especially an intelligent one.” When used as an adjective, it means “of or from outside the earth or its atmosphere.” Its synonym is the term “Supernatural.” The term “Hyperdimensional” is a noun that means “Of or pertaining to a system having more dimensions than naturally observed in our universe.” The term “Trans-dimensional” is an adjective that means “Transcending 3D space; relating to inter-&-extradimensional travel.”

The BIG question on most minds is, “is there anyone out there?” On Columbus Day in 1992, NASA initiated a more intensive examination of the ET question by setting up the SETI program. SETI is an acronym: Search for Extra-Terrestrial Intelligence. Their objective is, “To search for Intelligent life from outside the earth or its atmosphere.” When asked, “How will they know if they have found intelligent life,” their answer is, “Upon receiving a complex radio signal from space” or “Anything that seems to be generated by a non-natural, astrophysical processes.” In simple terms, a “non-natural, astrophysical process” is clearly Intelligent Design. Do you get that? The world governments are using your tax dollars to search for intelligent design that will lead them to an intelligent designer. The absurdity of this effort must certainly be obvious when the Bible tells us that the evidence for a creator is clearly available for all mankind to see and understand without the aid of the SETI program.3

This is the initial and predominant belief of most people. The idea is that these intergalactic ETs have travelled from some distant world and contacted the people of Earth for thousands of years. The most obvious problem with this theory is that it all comes down to a matter of scale and probability. Our sun is 8.5 light-minutes away (at an average distance of about 93M miles or 149M kilometers). According to astronomers, the closest star with a planet that might have life is Alpha Centauri is 4.37 light-years away.4

The question remains, could there be advanced life on a distant exoplanet? Consider the “Anthropic Principle.” In cosmology, it is the consideration of the structure of the universe, the values of the laws of nature, that has a bearing upon the existence of life.5 At present, scientists have cataloged over 400 quantifiable characteristics, each of which must fall within extremely narrow ranges for physical life to exist. In other words, “life is a miracle.”

Nevertheless, assuming that there is advanced life that has traveled through space for at least four-and-one-half years to come to Earth, why would they be dashing here and there over the past 3,000+ years with no apparent reason?

Most serious ET devotees do not seriously embrace the idea of the Tran Universal theory. The field of Theoretical Physics has given them a whole new canvass upon which they can better scribe their ideas. In one way or another, they all seem to describe a metacosm in which actions and reactions take place outside of our four-dimensional (three spatial plus time) senses. According to “Scientific American” journal, “A team of physicists has provided some of the clearest evidence yet that our universe could be just one big projection.”6

Thus, we have a plethora of proposed cosmological designs that offer innumerable options from countless parallel universes to time travel, and to wormhole (or portal) travel, that provide all almost instant access to the expanse of the known universe. By now, I am certain that you have seen the inventive nature of fiction becoming fact in the minds of many who are seeking answers as they are cast about on this shifting sea of conjecture.

Perhaps there is more logic to believing that ET can travel Trans Dimensionally than Trans Universal. Either way, we are left with these basic questions:

What does the Bible say?

The Bible records many occurrences when mankind has contact with supernatural beings (ET). Angels are mentioned 196 times in the Bible.

Many have a perception of Biblical angels that is WRONG. Cherubim are presented as babies with wings. Films like “It’s a Wonderful Life” present the idea that former humans go to heaven and become angels. Some believe that the prime duty of angels is to protect children from harm. The list of angelic misrepresentations can go on and on.

The prophet Elijah is taken up from the earth in 2 Kings 2:11. We have the eyewitness report of Isaiah seeing the throne room of heaven in Isaiah 6:2. We have the amazing experience of Ezekiel as he sees the “wheel within a wheel” in Ezekiel 1:4-6. We also have Ezekiel’s description of the four-headed cherubim surrounding the throne of God in Ezekiel 10:14. Finally, we have the many descriptions of the apostle John in the Book of Revelation.

Capabilities of these ETs?

This is a list of what they CANNOT Do:

This is a list of things they CAN Do:

As the Days of Noah

Jesus informed His disciples of the signs that would proceed His return.

When we review the history of this era, we find in Genesis chapter 6,

“Now it came to pass, when men began to multiply on the face of the earth, and daughters were born to them, that the sons of God (Hebrew: Ben HaElohim) saw the daughters of men (Hebrew: Benoth Adam), that they were beautiful; and they took wives for themselves of all whom they chose.”

The result of this unnatural union resulted in the arrival of the (KJV: Giants) (Hebrew: Nephilim).11 For a full briefing on this topic, see Chuck Missler’s Return of the Nephilim briefing package.

All ancient cultures have a legend concerning these “giants.” The Greeks had their Titans who were part terrestrial and part celestial. The Assyrians made images of their flying god, Ashur. The Egyptians revered their goddess Isis who had great wings. The Hindus of India have 33 million gods that have divine power. All of the gods of the ancient Americas are deified super-beings. Are these ancient people expressing an exaggerated image of something imagined, or are they simply describing what they saw?

Thanks to these “myths,” our modern entertainment industry has plenty of superheroes to use as their model. Of the top 30 highest-grossing films of all time (as of the end of 2019), 18 are about either aliens or superhumans saving the earth.

This obvious current obsession with the supernatural is evidence that people are being prepared for a global hero that will promise to fix the problems of the world. Sound familiar?

ETs in the End Times Scenario?

The apostle Paul told the believers in Thessalonica, “For the mystery of lawlessness is already at work; only He who now restrains will do so until He is taken out of the way. And then the lawless one will be revealed, whom the Lord will consume with the breath of His mouth and destroy with the brightness of His coming. The coming of the lawless one is according to the working of Satan, with all power, signs, and lying wonders, and with all unrighteous deception among those who perish, because they did not receive the love of the truth, that they might be saved. And for this reason, God will send them strong delusion, that they should believe the lie, that they all may be condemned who did not believe the truth but had pleasure in unrighteousness.”12

Jesus forewarned His disciples concerning the signs of the end by stating,

“For then there will be great tribulation, such as has not been since the beginning of the world until this time, no, nor ever shall be. And unless those days were shortened, no flesh would be saved; but for the elect’s sake those days will be shortened.”

The popular 1990s TV series “X-Files” had the tagline “The Truth is Out there.” I believe this to be true, but perhaps not in the place that most people are looking. The answers as clear as black and white if you seek truth in the Bible.

This article was originally published in the
June 2021 Personal Update News Journal.