The Prophet Ezekiel was called upon to undertake a number of strange performances, one of which was to lie on his side for a total of 430 days. 1 Each day was expressly to represent a year of judgment against the nation.

A number of commentators acknowledge a difficulty which appears when one attempts to apply this specifically to Israel's history. Seventy of the years would seem to be accounted for in the Babylonian Captivity, but that leaves 360 years (430 minus 70) unaccounted for. 2 The 360 years do not seem to fit any period of their history.

It has been suggested by some that there might be a clue in Leviticus 26, where God indicates that:

...if ye will not yet for all this hearken unto me, then I will punish you seven times more for your sins. -Leviticus 26:18

(In fact, this commitment is reiterated four times in that chapter for emphasis.3 )

It has been suggested that multiplying the "problem" 360 years by seven yields 2520 years, which is "approximately" the duration of time from the exile through the Diaspora.

This seemed rather contrived. Furthermore, it had bothered me since I never like to use the term "approximately" and "God" in the same sentence! I felt that if it was meant to fit, it would fit precisely. 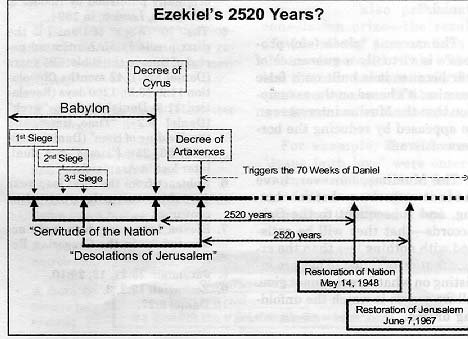 Sir Robert Anderson, in his classic work The Coming Prince, 4 noted that the Bible uses 360-day years in both Genesis and Revelation.5 However, I noticed that no one seemed to try to apply this insight to the 2520 years potentially suggested in Ezekiel Chapter 4.

In attempting to reconcile the 2520 360-day years to our Roman calendar, one is faced with the discrepancies between the sidereal year and the solar year. (The Julian year is 11 minutes and 10.46 seconds longer than the mean solar year.)

In 1572, it was recognized that errors had accumulated to 11 days too many, and adjustments were required. In the Gregorian Reform, September 4th was declared September 14th, and the formula for leap years was changed to exclude centuries unless divisible by four (and millennia by 400). Thus, 2520 360-day years contain 907,200 days, which are accounted for on our current calendar as 2483 years, 9 months and 21 days:

Great. But what do we do with this? Where do we begin to apply it?

Another problem occurs when we examine more closely the "Babylonian Captivity." There are two different periods that are candidates: "the Servitude of the Nation," and the "Desolations of Jerusalem." Each of these was prophesied to be seventy years in duration and many assume they are synonymous of each other; however, they are not.

There were actually three sieges of Nebuchadnezzar upon Jerusalem. The first siege began the "Servitude of the Nation" and was prophesied to last 70 years. (And it did, to the very day.8 When Cyrus conquered Babylon he encountered the amazing letter written to him by Isaiah a century and a half earlier, which addressed him by name, highlighted his meteoric career, and predicted that he would free the captives. His astonishment resulted in his releasing the Hebrew captives to return to Judea to rebuild their temple.)

The vassal king that Nebuchadnezzar left later rebelled; a second siege resulted in his uncle, Zedekiah, being appointed to the throne. The prophets Jeremiah and Ezekiel both went on to warn that if they persisted in rebelling against Nebuchadnezzar the city of Jerusalem would be destroyed. Yet Zedekiah ultimately yielded to the false prophets and rebelled.

The "Servitude of the Nation"?

On May 14, 1948, the nation Israel was reestablished on the world scene. A remarkable coincidence. Isaiah appears to have highlighted this very restoration:

And it shall come to pass in that day, that the Lord shall set his hand again the second time to recover the remnant of his people, which shall be left, from Assyria, and from Egypt, and from Pathros, and from Cush, and from Elam, and from Shinar, and from Hamath, and from the islands of the sea. And he shall set up an ensign for the nations, and shall assemble the outcasts of Israel, and gather together the dispersed of Judah from the four corners of the earth. -Isaiah 11:11, 12

Yet, there is another alternative application of the 2520 years:

The "Desolations of Jerusalem"?

On June 7, 1967, as a result of the Six Day War, the Biblical city of Old Jerusalem was restored to the nation. Another remarkable coincidence!

It should be borne in mind that the "starting" dates are not known precisely to the day. More research needs to be done. But this certainly seems provocative enough to ponder.

Zechariah predicted that the day would come when the entire world would be against Jerusalem, and that it would prove intractable to resolution. 9 Even as this goes to press, a climax is in the making.

Yassir Arafat has announced that Jerusalem will be the declared capital of a Palestinian State on September 13th of this year. Ehud Barak has indicated that he would annex the "West Bank." President Clinton has called for a meeting at Camp David in the hopes of bringing this to a "permanent resolution."

Many are optimistic that some kind of permanent peace can be arranged. Most of us know, from a Biblical perspective, that no real peace will occur until the Prince of Peace intervenes. In fact, the enforcement of a seven-year covenant, by a coming world leader, is the very definition of the "Seventieth Week" of Daniel.10

The current "piece (sic) process" is virtually a guarantee of war because it is built on a false premise: it's based on the assumption that the Muslim interests can be appeased by reducing the borders of Israel.

The Muslims, however, have made it very clear - before, during, and subsequent to the Oslo Accords - that they will be satisfied with nothing less than the extermination of Israel. They are insisting on what Israel cannot give. All we can do is watch the unfolding drama.

Let us remember that:

Behold, he that keepeth Israel shall neither slumber nor sleep. -Psalm 121:4

Perhaps an ostensible peace treaty will emerge on the international scene; we'll be watching with intense interest. It certainly does seem that we are moving along the classic Biblical scenario. What a critical time to prioritize your Bible study time and do your homework!

This article was originally published in the
August 2000 Personal Update NewsJournal.
For a FREE 1-Year Subscription, click here.
**NOTES**

In this study of Daniel's 70 Weeks, you will discover this amazing prophecy in the Old Testament predicted the very day that Jesus presented Himself to Jerusalem as the Meschiach Nagid, the Messiah the King.